Andy V has become known as an accompanying artist to the legendary bass music artist dub fx and now more recently as a solo act in his own right. With his multi-instrumental skills and looping abilities, Andy takes his listeners on a journey through Jazz, Reggae, Dub, Latin and Drum and Bass! He is a live act, not to be mistaken for a DJ, instead looping all his music up live.

In May 2017, Andy left his home in Melbourne with his debut E.P 'The Offering' co-produced by dub fx. Since then, he has been constantly and independently touring around Europe and U.K performing both on the street and the stage, following in the footsteps of his mentors Mr. Woodnote, dub fx, Eva Lazarus, Lil Rhys and Snareophobe.

Now U.K based, Andy has been busy in the South West bringing beats, bass, live loops and lot of sax!

Plus, DJ Sacha Dieu spinning heavy favourites 'til 2am. 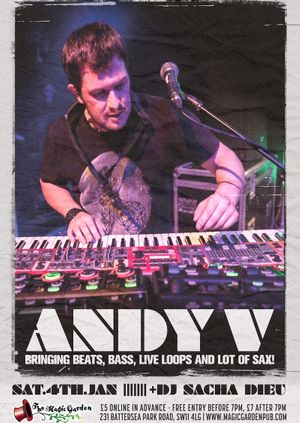